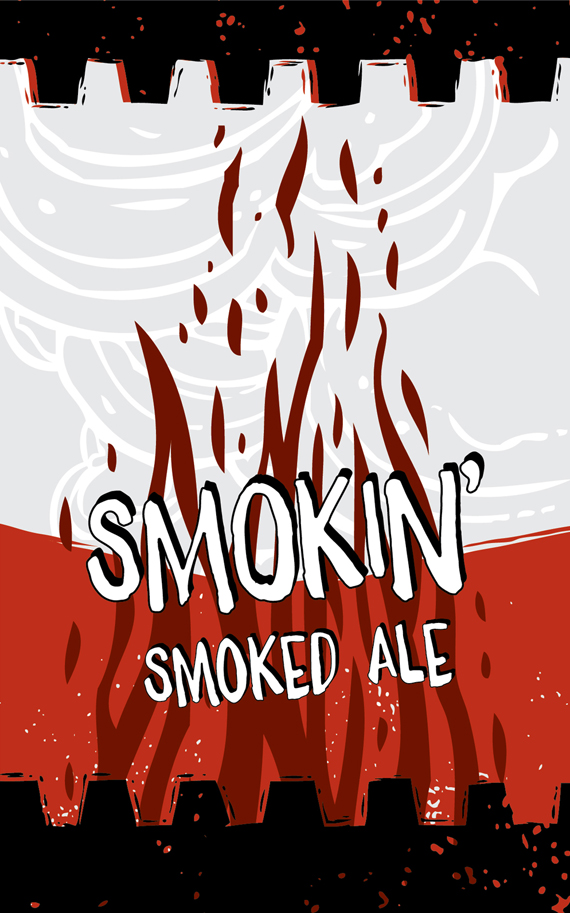 Smokin’ is an American take on a classic Rauchbier (German for smoked beer). It’s brewed with Bamberg malt smoked over a beechwood fire, hopped with Hallertau Mittelfrüh, and fermented with California ale yeast. Smokin’ is aromatic and flavorful, just shy of “bacon in a glass”.

Backstory
Rob first brewed a Rauchbier back in 2009. Except he didn’t have the equipment to lager the beer; so he brewed it using an ale yeast. And he didn’t have the ingredients the recipe called for, so like any good homebrewer, he winged it. However, the end result was a beer that brought him the title of Sam Adams Patriot Homebrew Competition Champion for 2010, earned him the privilege of brewing a version of the beer with the brewers at Sam Adams in Boston, and having the beer poured at Gillette Stadium during the 2010 New England Patriots season. Since 2009 the recipe has evolved and improved, and we’re thrilled to offer it as one of our three flagship brews.

Food Pairings
Smokin’ is a natural fit with your favorite BBQ such as pulled pork, brisket or ribs. It’s also great with grilled meats and vegetables or even a good old cheeseburger. But it can also bring the smoke to any meal. Try it with your favorite Mexican dish such as tamales with pork carnitas or a black bean quesadilla. Additionally you can cook with Smokin’. Try it in place of stock in chili, soups, sauces or braises.