NOTE: Listing of available beers at the bottom of this post has been updated as of 3/19 6:05 PM.

With the Governor’s order that all NH restaurants and bars close, our Tasting Room will be open for to-go service only until the order is lifted.

The hours for this coming week are below. We will re-evaluate as we go and determine what our hours will be after that.

Beer available to go will be cans, growler fills, and kegs. Please feel free to call ahead (603) 858-5789 and we will get your order ready (beer list and pricing are at the bottom of this post). Calling ahead especially for growler fills or kegs, will definitely speed up the process and eliminate wait time. If you call and get our voicemail, please leave a clear message with your name, phone number, order, and expected pick-up time. We’ll do our best to be ready for you.

During this time, we will not be filling non-branded growlers (for example stainless steel, ceramic, GrowlerWerks, etc.). If customers come in with one of these for a fill, we will offer you a new Great North glass growler at no charge. All customer owned Great North Aleworks branded growlers will be swapped for a new one.

Since normal Tasting Room events are not possible at this time, we will be doing a ‘to-go’ version of our Raise a Glass & Cash fundraiser. During the weeks that we are operating in a to-go manner, we will donate $1 for every 4-pack, 6-pack, and growler fill to our friends and neighbors at the New Hampshire Food Bank.

As always, we appreciate the support of all of our customers, your support of other breweries, bars, restaurants, and retail stores.

Here is a current list of what we have available in cans, growler fills, and kegs:

Manchester, NH • December 20, 2019—Great North Aleworks is excited to announce a partnership with Nappi Distributors to expand its distribution to the state of Maine.

“Bringing Great North beers to Maine has been a goal of ours since Day 1. Lisa and I both started our professional careers in Maine in the mid-late 90s and have always appreciated its beer scene; we are thrilled to finally be a part of it.” said Rob North.

Great North Aleworks is near the completion of a year-long expansion project that included increased fermentation capacity, a centrifuge, a 1300 square foot drive-in cooler, and 2.5 barrel pilot system.

“Nappi Distributors is excited to begin this partnership with Great North Aleworks. Their unique portfolio, including Moose Juice IPA, is a natural fit for the state of Maine. Rob and his team are making some of the best beer in New England and we’re pleased to welcome them to the Nappi family.” said Ben Royal Craft Brand Manager for Nappi Distributors.

To kick things off, Nappi and Great North will be at the famed Great Lost Bear in Portland, Maine for a launch event on Friday, December 20, 2019 from 4-6 p.m.

In October 2019 we had a special guest stop by the brewery. Samuel Adams Founder and Chairman Jim Koch was in Manchester and made some time during his busy schedule to check in on his old friends Rob, Lisa, and Mike.

Back in 2010 our Founder Rob North won the Samuel Adams Patriot Homebrew Competition. This gave him the opportunity to brew his award winning beer at the Sam Adams brewery in Boston and have it served on tap at Gillette Stadium for the 2010 New England Patriots season. That beer would later evolve into one of our original releases, a smoked ale called Smokin’. Not long after Jim visited Manchester to film a TV pilot and was a guest at Rob and Lisa’s home where they homebrewed together in the North’s driveway.

The year before that in 2009 our Lead Brewer Mike Robinson won the Samuel Adams LongShot homebrew competition with his Old Ale recipe. Mike’s beer was part of a 6-pack that was distributed nationally. He traveled with Jim to the Great American Beer Fest and spent time with him judging future LongShot competitions.

Now both Rob and Mike are professional brewers! So it was a full circle moment hosting Jim and showing him around our brewery and sharing our beers over stories old and new.

Thank you to Jim and Samuel Adams for always supporting homebrewing and independent brewers!

Where to find CoWITbunga, Dude!

Searching for a 4-pack or pint of the official beer of the 2019 Granite State Comicon? The list below will be updated daily as it ships to stores and bars throughout New Hampshire. A small amount is also available in Massachusetts. 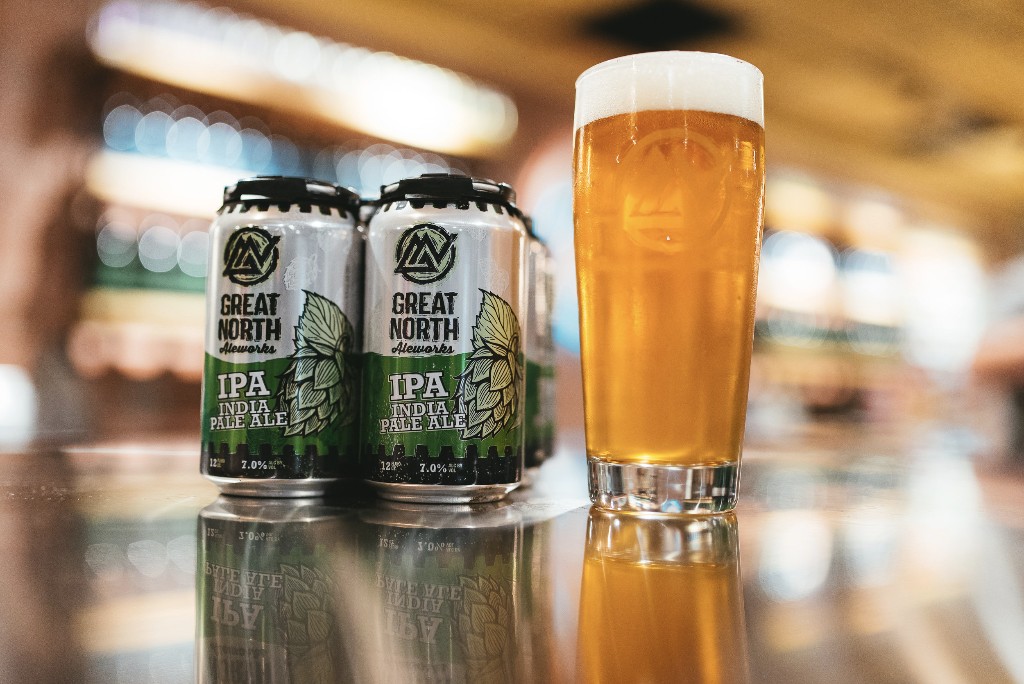 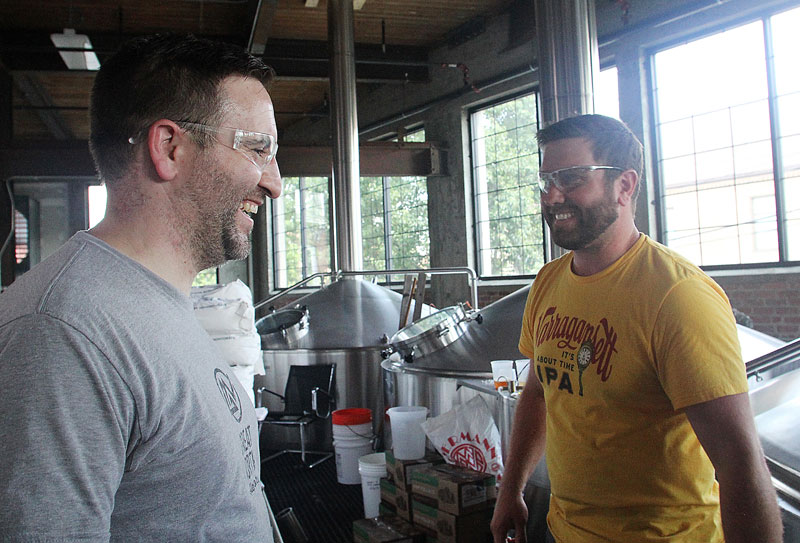 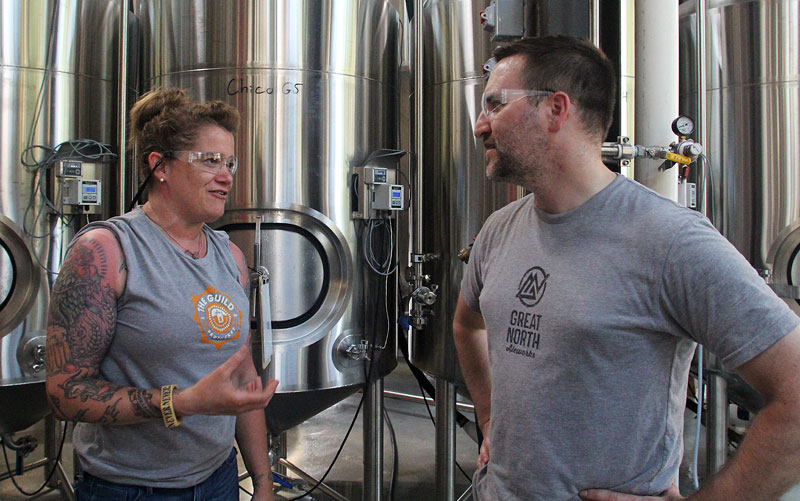 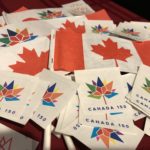 Thanks to all who came by the brewery on July 1st to help celebrate Canada Day. We all had a blast & we hope you did too! A lot of people participated in Canada Day trivia – as promised, the answers are available via the link below.

The maximum number of points that could be earned was 43. The winner was Josh Abugov with 42 points (there were 4 other answer sheets in the 40’s). Josh will receive a $25 gift certificate for the win!

We have a lot of upcoming events in the tasting room. Here are the highlights…

July 6th – Brewed & Acoustic Open Mic Night – Join us in the tasting room from 6-8 p.m. for an evening of original music led by local singer/songwriter Alli Beaudry. Alli will perform some of her own music in addition to the many other aspiring musicians that will take to the mic! We will also have featured artist, Jordan Levesque! Jordan will perform a number of her original songs. Performer sign-ups start at 5:45 p.m.

July 27th – The Great Cribbage Tourney – The Great Cribbage Tourney returns on July 27th from 6-9 p.m. Please sign up before 5:30 p.m. the day of the tournament so we can prepare the brackets. You can sign up in the tasting room (ask for the sign up sheet at the bar), or send us a note on our Contact Us page. There will be a prize for the Champion and the winner of the Second Chance bracket. All skill levels are welcome!

August 26th – Save the Date! – It’s hard to believe we are approaching our 2nd Birthday, so we will once again be throwing a Great North Birthday Bash in the tasting room. More details to come!
March 1, 2017 By greatnorth in Events, Beer, News 0

We’re excited to announce that we recently signed a distribution agreement with Sarene Craft Beer Distributors making our beers available in the Nutmeg State! Cans and kegs of Great North IPA, Tie Dyed, Robust Vanilla Porter, and Chocolate Milk Stout will begin showing up in stores, bars and restaurants throughout the state beginning February 28, 2017.

To celebrate our launch, Rob and Brian will be in Connecticut later this week for some special events:

Please share the great news with your friends and family in Connecticut!

Where to find Tragically Hopped

UPDATED LIST, Friday, Jan 20th. We promised to let folks know where Tragically Hopped cans would be available for purchase. The list below is of stores who have received, or will receive delivery as of Friday. There are still some stores who will get deliveries next week. Cheers!